Difficult economic times tend to bring out skepticism or at least a review of current practices. Recently, I was asked “Do variable rate applications of any crop input really pay?” To some it might be surprising that 20 plus years after variable rate technology was first brought to the market, there are still so many that haven’t “bought in” to the concept.

In some parts of the country, growers that used to variable rate crop inputs no longer do. When you ask these growers why they quit — frequently the answer is “I didn’t know if it paid.”

But all that has changed. Using your yield file, you can now quantify results and answer the did-it-pay question. Since 2005, we’ve been checking our work with our trademark Learn- ing Blocks and we have proved, and continue to prove every year, that variable rate applications frequently pay. It’s not 100% but given the complexity of our modern crop production the results from millions of acres are amazing. In this example, the grower used Learning Blocks as a low-risk way to test whether the nitrogen prescription was correct. 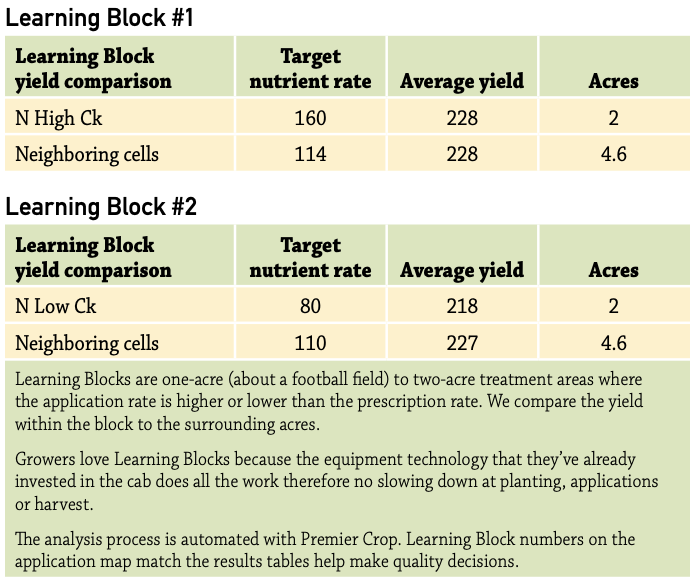 Our experience has been that growers love the Learning Block concept. They love the idea of advisors who are willing to check their work. Still today, that is uncommon. With regard to most variable rate prescriptions sold today there is no validation of the results. Rather, growers are sold a prescription for a crop input and told that a model or algorithm is so sophisticated that it just works. But without a check area of higher or lower treatment to compare to the prescription rate, there isn’t any way to know if it worked.

One Rate Doesn't Fit All