1 pound into a sample bag, send it off to the lab, get the results back, and then pretend that what was on that sheet of paper accurately represented the nutrient levels for that entire field. While that may have been the best we could do then, we can do much better now — but many are treating entire fields the same. The economics of grid or small-zone sampling fields and variable-rate applying lime, P and K need to be revisited by many growers and their advisers. Nutrient prices have tripled since grid sampling was first introduced, and grain prices have escalated from the $2.50 per bushel days — meaning the reward for managing your nutrient investment intensely has never been higher.

In the early days of grid sampling, too many preached we would even out nutrient levels within fields by applying P and K on the low-testing areas while mining down the high-testing areas. The pitch was that in a few years, the map that previously showed so much variability would be one color, with each part of the field in the same nutrient range. However, 15 years and seven to 10 variable-rate applications later, very few fields have uniform nutrient levels. Trying to create uniform fields was the wrong goal — the goal needed to be higher yields, not ppm’s on a map. Grid sampling and variable-rate nutrient applications are needed foundations for getting started in precision agronomy. 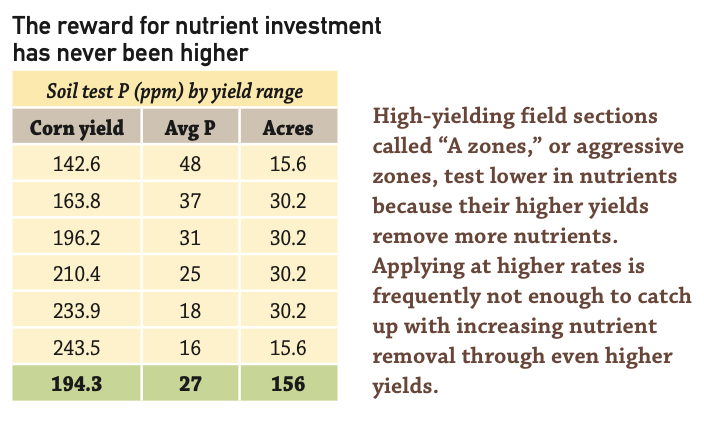 In many fields, a comparison of yield and fertility data will show the lower-testing parts of the field are the highest yielding. These high-yielding parts of the field are what we define as “A zones,” A standing for aggressive. A zones can test lower in nutrients because consistently higher yields remove more nutrients (see table). Even though variable-rate applications might put more nutrients on these A zones, it is frequently not enough to catch up with increasing nutrient removal through even higher yields.

Think of A zones within your fields as Olympic swimmers — able to consume 8,000 calories per day and remain lean and fit. A zones are so productive, they warrant an all-you-can-eat buffet.

Just as A zones call for being even more aggressive, for us, C zones are the parts of the field that justify being more conservative. In fields that have had straight-rate blends applied for years, it is easy to pick out C zones in the data. These consistently lower-yielding areas can become nutrient obese from lack of productivity. For Premier Crop, variable-rate apply- ing nutrients is not about saving money; it is about reapportioning a higher nutrient investment within each field to maximize nutrient efficiency. One rate does not fit all.

Does Variable Rate ANYTHING Pay?