Today we are talking with Dan and Darren about nutrient planning and its importance during this part of the growing season.

DARREN FEHR: Good morning, Dan. We’ve done a number of these already, so we’re kind of cooking here in this podcast world. I want to talk this morning about nutrient planning. So, let’s start off this morning, Dan, by going through the process that our advisors have undertaken for several years. What is their approach to nutrient planning? You can talk about nitrogen separately from phosphorus potassium, but give our listeners a little bit of an overview of the nutrient planning process.

DAN FRIEBERG: 2021 nutrient planning is one of the first things that’s tackled because a lot of advisors want to get ahead of the curve. They want to be able to have had that planning discussion with growers before they get in the combine. Growers start identifying which fields go into what crop, and then the next piece is usually addressing nutrient planning. There are parts of the Midwest that really have drought. There’s a big chunk that’s also going to have wind damage where they might not harvest a crop. Those are additional considerations, but, for us, nutrient planning, especially in the fall, a lot surrounds phosphorus and potassium, and those are two of the three major nutrients.

Sulfur’s probably the other one that’s really become the fourth major nutrient. Sulfur and nitrogen are mobile nutrients, so there is some fall application in heavier soils. But, certainly, phosphorus and potassium would, a lot of times, be the first nutrients to hit the field. The approach depends on what kind of a crop you’re removing. But, certainly, a big piece of what we do is we use some type of spatial soil sample as one of the foundation pieces. A spatial soil sample can be a grid sample, where the field is divided into smaller sizes, and you have a lot of samples within a field. Two-and-a-half-acre grids are really, really common in a lot of areas.

In other areas, zone sampling might be more common where they divide the field into zones, and those zones could be driven by soils or historic imagery or EC conductivity. But the big thing is, a lot of times, instead of capturing one sample for an entire field, they’re capturing a lot more intense or site-specific samples.

DARREN FEHR: Let’s just start here, when our advisors are working through nutrient planning at this time of year. Pre-harvest, is the removal estimate based on estimated yield? How are we going about creating that first draft, if you will, of the nutrient plan?

Another piece of what we do is use yield files to actually capture the removals, and sometimes that’s last year’s yield file. It could be two years of yield removal if you’re on a two-year cycle. It could be just one year of yield removal. And for some people, literally, because we’re getting yield faster and faster, it can be this year’s yield file. Meaning, because we’re capturing yields every second, we’re able to calculate the phosphorus and potassium removal off that yield file. So, two of the major pieces would be using some type of spatial soil sample, and then using a yield file to not guess at removals but to calculate actual removals.

DARREN FEHR: I think there are nutrient prescriptions made on many millions of acres here in the Midwest and across Canada. What are some common mistakes that are made, or what are some things that growers should make sure went into their nutrient plan? You mentioned a couple: some type of a grid sample, some kind of a soil measurement to understand where we are, and the other one is attributing a yield file to overlay an understanding of productivity. What else is necessary that growers should ensure that their trusted advisor is including in their nutrient plan?

This is just all math. Having more complex equations is a big part of what we do. It really goes to just this idea. I mean, if you think about nutrients, in general, across the country and across entire countries, we tend to have recommendations that are a little bit “one size fits all.” What we’re able to prove is that the ideal combination of soil-supplied, which is what we measure through a soil test, and fertilizer, or manure-supplied, changes within field boundaries. It makes sense to us that some areas of the field just respond more to nutrients than other areas of the field, and we want to take advantage of that.

DARREN FEHR: We have talked a lot about agronomy as local in the past. And because we believe that, in site-specific recommendations, paying attention to every field, specifically in every different productivity area inside of every field, it makes it important to create unique prescriptions. And when you talk about equations, they are based on productivity, based on soil analysis, based on removal rates. When you think about the rate of nutrients that should be applied, how do you decide? How do you know if you have enough, too much or too little?

DAN FRIEBERG: For us, it comes back to being able to do trials in growers’ fields. Sometimes I sound like I’m critical of land-grant universities. I’m not. I’m a land-grant university product. Land grants were a big piece of educating and bringing science to agriculture, and they still are. They still have a really key role, but it’s this transformation. Instead of taking research that was done somewhere else, we’re actually able to put replicated trials in growers’ fields.

One of the things we hear all the time is you can’t get more local than my fields. That ability to use analytics to inform our recommendations, and then turn around and put a rate trial in different areas of a grower’s field, is a key piece of our strategy. Doing scientific trials within each part of each grower’s fields is just a big piece of our culture and this idea of continuous improvement.

Darren, you asked me earlier what some of the common mistakes are. In the area of variable-rate nutrient application, the I believe the single biggest mistake is that we’re going to test your field, and then we’re going to make variable-rate applications. And the map that looked like there was so much variation, it’s all going to be one color someday. We’re pulling down the high areas and building up the low areas. Four years from now, your field will all be one color.

The goal of variable-rate nutrient application and why you would do a soil test was never to achieve a part-per-million number. Even though equations use part-per-million soil test values, nobody gets paid by that. The grower doesn’t get paid because they got their phosphate to 30 parts per million or 25 or whatever the number is. The goal never should have been achieving a part-per-million number. The goal is to produce yields as efficiently as possible. In areas where nobody has been doing much sampling, and they’ve been doing uniform applications, we typically find that the lowest fertility areas are actually the highest yielding. 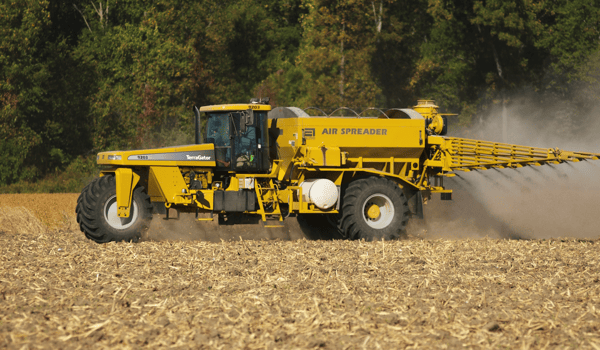 And the reason they’re low fertility is those high-yield areas have mined down the nutrients. The field is treated uniformly. I put the same blend on every acre. I’ve done it for the last 10 years. The point is, you haven’t been removing nutrients as uniformly as you’ve been applying them. Those consistently high-yield areas have pulled down nutrients. The consistently low-yield areas have allowed nutrients to build up in the soil test. You capture that when you soil sample it, and that can be a foundational piece. But, what we also find is that those areas that are consistently higher yielding, it’s hard to keep up with them. The more you apply with certain nutrients, the better the yield.

Our point is never to try to even out the field and make it one color on a soil test map. Ours is all about: how do we generate more dollar return for every dollar we invest within those areas of the field? And if we never catch up soil test-wise, that’s great because if we never catch up, that just means we kept producing better and better yields as efficiently as possible.

DARREN FEHR: Since we started doing enhanced learning blocks…I don’t know, what are we in? Our fourth or fifth year?

DARREN FEHR: What is the insight that surprised you the most when you looked at how we advanced or accelerated that rate for nitrogen or other nutrients? Especially when you learned how much money we left on the table? Tell me how that journey has been for you.

DAN FRIEBERG: The dollars per acre are way bigger. The dollar per acre returned to the grower is way bigger than I thought. I was obviously a really big advocate that everybody should be using the technology available to do better agronomy. I didn’t realize that the dollar-per-acre swings for the grower were as big as they are. We’re seeing 80 to 100 dollar-an-acre swings by single nutrients. When you realize there are that many dollars in play, it just leads you to want to do it better. We got to get even better at this. We’re just beginning to understand and to tap into what’s possible.

DAN FRIEBERG: But just think about what you said because it’s really key that everybody understands it. If you do that everywhere, if you take that attitude everywhere, you’re wasting dollars. What we’re talking about is there are areas of fields where everything is working. Everything is working, and those areas just seem to keep climbing, and you see it in trials. You see responses to being even more aggressive. So, it does surprise you.

DARREN FEHR: Okay. Thanks, Dan, for sharing a little bit of your insights today on nutrient planning for any of our listeners that do get a prescription created by their supplier or adviser. And if you want to take that to yield and prove it paid, contact us at www.premiercrop.com. This is kind of what we do. We take a prescription. We take the planning process and prove it out in their analytics, and we’d love to do it for you. So, thanks Dan, and we’ll talk again next week.