A LEGACY FOR GENERATIONS IN THE ROSSMAN FAMILY

There are no right or wrong answers to the title of this blog, How Technology has changed agriculture, instead there are too many to write about. Technology is supposed to make our lives easier and our work more efficient.  Depending on your age (generation) your answers to this question will differ.  I decided to ask my dad and grandpa what technologies have had the most impact on their farming careers. 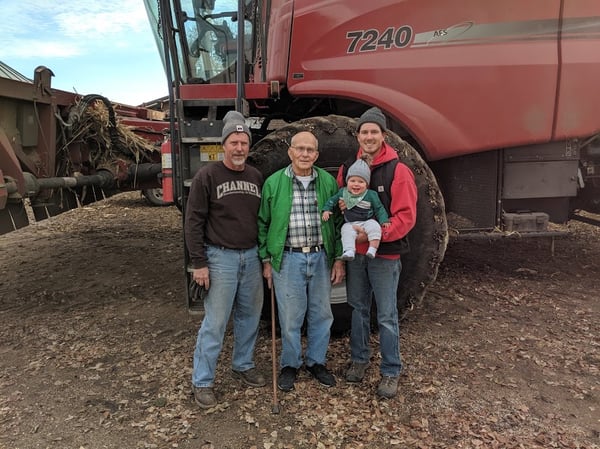 At 93 years old, my grandpa has experienced significant transformation in agricultural development – from farming with horses to now high-horse powered tractors. His initial answer to my question was herbicides. The advent of chemical weed control made his life much easier. Cultivating and walking fields to manage weed pressure, both time consuming tasks, were not eliminated, but herbicide use was a great management strategy to add. The invention of hydraulic cylinders was another technology he mentioned that made farming much easier. Prior to hydraulic cylinders showing up on implements, farmers used cables, chains, and levers to raise, lower, and adjust equipment. Manual labor was reduced and an easy pull on a lever to direct oil flow was all that was needed to control equipment. The last technology he mentioned having a significant impact on his farming career was the implementation of conservation practices (reduced tillage, contours, terraces). Plowing, or conventional tillage, leaves the majority of the soil surface exposed for erosion – both wind and water.  Reducing erosion and preserving the topsoil benefited him and future generations.

My Dad has been farming for nearly 40 years and has experienced numerous advancements, too. Herbicides, hydraulic cylinders, and conservation farming had all been invented or implemented before his career started.  He agreed that the technology most impactful to my grandpa has also had a positive impact on his career, but shared different technologies that have had a more direct impact to him. His first answer to my question was simply electronics. I asked him to be more specific, but he stuck with his broad answer because it covers many specific technologies. Tachometers on tractors used to be a gauge with a needle that moved – now it’s a digital readout. Yield was measured as an average value for the field after it went across a scale – now we measure yield thousands of times within a field.

Our ability to spatially assign (map) yield within a field allows for investigation into factors the drive or limit yield. Planters were ground-driven – now each row can be powered with its own electric motor. GPS and electronics have given us the ability to control our equipment with finite detail, which improves efficiency. The development of herbicide tolerant crops is another technology that has impacted dad’s farming career. My dad had been utilizing herbicides for many years, but it wasn’t until the late `90s that herbicide tolerant crops were introduced. Since then weed control has never been the same. At first it was easy, but weed resistance to different chemistries has added complexities. Even with issues surrounding weed resistance, it is still easier and more effective than weed control before herbicide tolerant crops entered the market.

In my 27 years on Earth there have been quite a few changes in agriculture, but it doesn’t compare to what dad and grandpa have experienced. Thinking back to my childhood, the most significant advancement in agricultural technology would have been the addition of ‘buddy seats’ in tractors. The change from half-sitting on an armrest to having my own seat was a big deal (to me). Today, when I think about future technologies in agriculture, the first thing that comes to my mind is data. There is an immense amount of data being collected by agricultural equipment. What new insights will farmers glean from this data? How will it make farming easier and production more efficient? 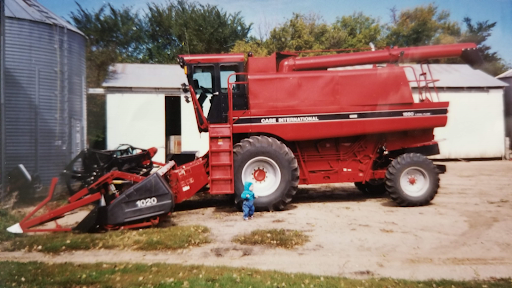 I can’t relate to operating equipment without hydraulics or plowing every acre. I grew up in the era of Roundup, so weed control has seemed relatively easy, but I have walked more beans than I’ve wanted. I have an appreciation for what farming was like, but will probably never fully understand how it has changed in the past 100 years. Agricultural technologies will continue to evolve and provide solutions to make life easier and more efficient.

To date, what technology has had the most significant impact on you and your operation?  What do you think future generations will voice as the most important technology change in agriculture? With all the data you are collecting, how are you using it to make better decisions and continuously improve?

Precision Ag as a Service - Should it be a Service on Your Farm?