One of the services Premier Crop provides growers with is community or group data analysis from a regional basis. Growers can confidentially and anonymously share their field data with other growers in their region through written data-sharing agreements. Group data analysis complements field- and grower-level analysis; growers receive actionable field intelligence they can use on their own fields.

At Premier Crop, we are constantly challenging growers and their advisers to dig deeper into their data. For example, a few years ago one of our customers, a grower we will call Bob, wanted to use data to make decisions on trying to capture the 40-cent-per-bushel early harvest pricing premium his local ethanol plant was offering. Bob’s data analysis considerations started out with the yield penalty for planting earlier-maturity hybrids in his area.

Current and historic data analysis of his and other growers’ data in Bob’s adviser’s 100,000-plus acres of multiyear group-data database showed a consistent 15-bushel-per-acre penalty (185 vs. 170) for planting early maturities over the past five years. The adviser and the grower calculated that he needed a 35-cent-per-bushel premium to break even.

Bob’s second question was whether the yield penalty was universal across all soil types. His adviser added soil type to the relative maturity query and the results showed a 10-bushel disadvantage on the lighter soil types, which was about 25% of the grower’s operation. The overall yields weren’t as high on the lighter soils, which might be part of the reason why the penalty was lower. 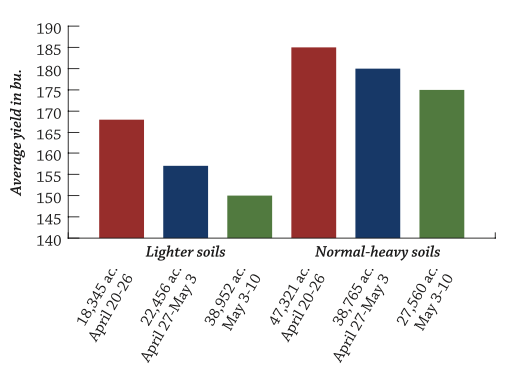 Planting earlier maturities on lighter soil-type fields dropped the breakeven premium to 23 cents per bushel — offering a potential $30-per-acre advantage to planting an early-maturity corn and capturing the premium.

The adviser suggested they dig even deeper and look at planting date, as well. The adviser’s instincts led to an even more powerful discovery. The reward to earlier planting was (18 bushels-per-acre) more significant on the lighter soil types than the normal and heavier soil types (10 bushels per acre).

This last discovery didn’t make sense at first. Like many growers, Bob liked to plant his “best” fields first — best being those with the highest yield potential. Because the lighter soils had less yield potential, they tended to be treated as the secondary ground. But as Bob and his adviser considered what the data analysis was showing, they realized that later planting dates meant pushing pollination back into the hotter and drier weeks of summer. The lighter soils didn’t have as much water-holding capacity as the normal and heavy soils, which were better able to handle stress without losing yield.

So, did Bob plant earlier-maturity corn on his lighter soils first to capture the early harvest fall premium? More than likely, but I’m not positive. However, I do know the entire process led to the purchase of an additional planter. The planting date data analysis was so overwhelming it was easy to justify the addition of equipment needed to plant all his acres earlier. As convincing as the analysis was on the lighter soils, Bob was willing to potentially lose 10 bushels an acre on his best soils by switching planting order.

And imagine his delight in being able to use data to justify to his wife why buying more equipment was the right answer!

Can’t Save your Way into Prosperity